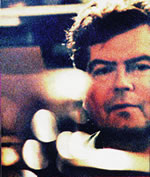 I’m known as a writer, but writing your own bio is tough..It might be the toughest assignment I ever had.

But I’ve done it before. The key is to keep it brief and always ask yourself, how much does anyone need to know?

This being a webpage, I’ll expand a little but not much. A faulty memory might be a blessing in this case.

I was born in St. Boniface, a French-Canadian speaking city within Winnipeg. I was the eldest of five kids – Betty, Bill, Gary and Don following me. My parents constantly were broke, which might account for my father’s many different jobs and my mother bucking ‘50s social convention and going to work. We knew hardships, then, but nothing disastrous.

We lived in Winnipeg, Edmonton, Winnipeg again and finally North Vancouver. The idea to move to North Vancouver was to start over and be near the other Harrisons, who’d moved from Winnipeg years before.
At first we were outcasts within the large family – five uncles and an aunt – because of our poverty and my parents’ evident liberal attitude toward bringing us up. Over the years, my brothers and sister have triumphed in their own way.
Gradually we rebuilt and by the early ‘70s I was enthralled by music, collecting records and listening to the radio constantly. North Vancouver also seemed really hip, although there was nothing to do.

At high school, I discovered that I had a talent for writing and enjoyed it.
Later on, I became the music director at the University of British Columbia’s campus radio station, which then was known as CYVR. The station was feeble but it put me in contact with record label representatives. Simultaneously, I still was consuming music voraciously and reading about it. One Toronto-based music monthly, Beetle, had a reviewer that aggravated me so much I wrote a letter of complaint. Immediately, I was remorseful and sent the editor a few of my own reviews to show that I was prepared to “put up or shut up.”

He wrote back, saying, these are good. He wanted more and asked if I was in a position to do interviews. As CYVR’s music director I was. I think my first published review was of a Magma album. My friends threw a party and I was called an “international jet-setting rock critic.”

Not quite. Beetle folded in 1975 and I was hired by the Georgia Straight to fill a hole created by Bob Geldof. In 18 months in Vancouver, Geldof had increased the Strraight’s music coverage significantly but he was going back to Ireland, muttering something about forming a rock band, which eventually became The Boomtown Rats . In four years at the Straight, I increased the music coverage even more, freelanced on the side, and took up drums. As a novice drummer, I pounded for The Explosions, the Straight’s “house band.”

We issued a single and opened for Talking Heads at the Commodore the day Keith Moon of The Who died, September 7, 1978.

At the height of punk rock hysteria in Vancouver in mid-79s, I was taken on by The Province newspaper. My punk rock sympathies resulted in a few unpopular reviews but I’ve persevered to the point where I am now an elder statesman, which I find both inevitable and ironic. I continued to drum with a band of North Van friends, the Potatoes, with whom I learned I could sing. I got married, to Kerry, in London, England in 1983. Kerry, who also worked at The Province, and I took a leave of absence for six months. When we got back to Vancouver, I became the singer for a band called Bruno Gerussi’s Medallion. We signed to Warner Bros. Canada in 1989, released an album, In Search Of The Fourth Chord, toured a bit, and enjoyed a little notoriety.

During this time, I hosted or co-hosted a cablevision TV show, Soundproof, which played videos and featured a slew of local bands.

I also helmed Demolisten, which for two hours each week played demo tapes and eventually Cds of local bands on CFOX. This developed into the annual Seeds competition, but I was long gone.

Bruno Gerussi’s Medallion reunited for one night in October 1998 and recorded a live album. Not many were pressed. Too bad, it’s a good album.

I went back to work a year later and eventually joined another band, Lumpy. We made an album, my first of the era of downloading, MySpace, CD Baby and You Tube. It’s a good album.

My father died in 1994 of cancer. My mother died in 2005 of a heart attack. My sister died of cancer in 2009. It sometimes is strange to realize you’re the oldest living Harrison.
Any questions?

The ebook, published by The Province and HarperCollins Canada, is $7.99 and available for purchase at: